Gordon A. Giese looks on as his son Paul Giese tends to morning chores at the family farm, God Green Acres in Mayville, Wisconsin, June 24, 2019.

In the wake of the U.S. housing meltdown of the late 2000s, JPMorgan Chase & Co hunted for new ways to expand its loan business beyond the troubled mortgage sector.

The nation’s largest bank found enticing new opportunities in the rural Midwest – lending to U.S. farmers who had plenty of income and collateral as prices for grain and farmland surged.

JPMorgan grew its farm-loan portfolio by 76 percent, to $1.1 billion, between 2008 and 2015, according to year-end figures, as other Wall Street players piled into the sector. Total U.S. farm debt is on track to rise to $427 billion this year, up from an inflation-adjusted $317 billion a decade earlier and approaching levels seen in the 1980s farm crisis, according to the U.S. Department of Agriculture.

But now – after years of falling farm income and an intensifying U.S.-China trade war – JPMorgan and other Wall Street banks are heading for the exits, according to a Reuters analysis of the farm-loan holdings they reported to the Federal Deposit Insurance Corporation (FDIC). 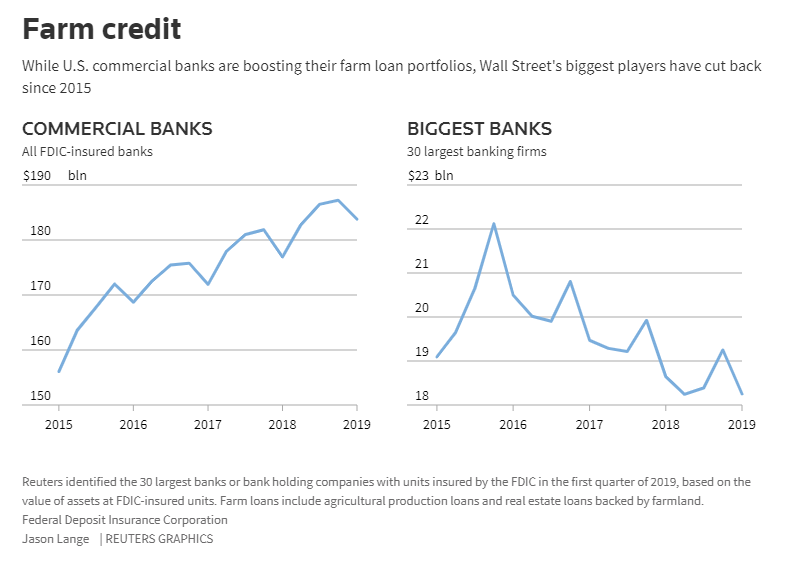 Reuters identified the largest banks by their quarterly filings of loan performance metrics with the FDIC and grouped together banks owned by the same holding company. The banks were ranked by total assets in the first quarter of this year.

The retreat from agricultural lending by the nation’s biggest banks, which has not been previously reported, comes as shrinking cash flow is pushing some farmers to retire early and others to declare bankruptcy, according to farm economists, legal experts, and a review of hundreds of lawsuits filed in federal and state courts.

Sales of many U.S. farm products – including soybeans, the nation’s most valuable agricultural export – have fallen sharply since China and Mexico last year imposed tariffs in retaliation for U.S. duties on their goods. The trade-war losses further strained an agricultural economy already reeling from years over global oversupply and low commodity prices.

Chapter 12 federal court filings, a type of bankruptcy protection largely for small farmers, increased from 361 filings in 2014 to 498 in 2018, according to federal court records.

“My phone is ringing constantly. It’s all farmers,” said Minneapolis-St. Paul area bankruptcy attorney Barbara May. “Their banks are calling in the loans and cutting them off.”

Surveys show demand for farm credit continues to grow, particularly among Midwest grain and soybean producers, said regulators at the Federal Reserve Banks of Chicago, St. Louis, Minneapolis and Kansas City. U.S. farmers rely on loans to buy or refinance land and to pay for operational expenses such as equipment, seeds and pesticides.

Fewer loan options can threaten a farm’s survival, particularly in an era when farm incomes have been cut nearly in half since 2013.

Gordon Giese, a 66-year-old dairy and corn farmer in Mayville, Wisconsin, last year was forced to sell most of his cows, his farmhouse and about one-third of his land to clear his farm’s debt. Now, his wife works 16-hour shifts at a local nursing home to help pay bills.

Giese and two of his sons tried and failed to get a line of credit for the farm.

“If you have any signs of trouble, the banks don’t want to work with you,” said Giese, whose experience echoes dozens of other farmers interviewed by Reuters. “I don’t want to get out of farming, but we might be forced to.”

Michelle Bowman, a governor at the U.S. Federal Reserve, told an agricultural banking conference in March that the sharp decline in farm incomes was a “troubling echo” of the 1980s farm crisis, when falling crop and land prices, amid rising debt, lead to mass loan defaults and foreclosures.

JPMorgan Chase’s FDIC-insured units pared $245 million, or 22%, of their farm-loan holdings between the end of 2015 and March 31 of this year.

JPMorgan Chase did not dispute Reuters’ findings but said it has not “strategically reduced” its exposure to the farm sector. The bank said in a statement that it has a broader definition of agricultural lending than the FDIC. In addition to farmers, the bank includes processors, food companies and other related business.

The decline in farm lending by the big banks has come despite ongoing growth in the farm-loan portfolios of the wider banking industry and in the government-sponsored Farm Credit System. But overall growth has slowed considerably, which banking experts called a sign that all lenders are growing more cautious about the sector.

The four-quarter growth rate for farm loans at all FDIC-insured banks, which supply about half of all farm credit, slowed from 6.4% in December 2015 to 3.9% in March 2019. Growth in holdings of comparable farm loans in the Farm Credit System has also slowed.

Many smaller, rural banks are more dependent on their farm lending portfolios than the national banks because they have few other options for lending in their communities. As farming towns have seen populations shrink, so have the number of businesses, said Curt Everson, president of the South Dakota Bankers Association.

“All you have are farmers and companies that work with, sell to or buy from farmers,” Everson said.

As the perils have grown, some smaller banks have turned to the federal government for protection, tapping a U.S. Department of Agriculture program that guarantees up to 95% of a loan as a way to help rural and community banks lend to higher-risk farmers.

Big Wall Street banks have steadily trimmed their farm portfolios since 2015 after boosting their lending in the sector in the wake of the financial crisis.

The agricultural loan holdings at BB&T have fallen 29% since peaking in the summer of 2016 at $1.2 billion. PNC Financial Services Group – which ran full-page ads in farm trade magazines promoting “access to credit” during the run-up – has cut its farm loans by 12% since 2015.

BB&T said in a statement that the decline in its agricultural lending portfolio “is largely due to aggressive terms and pricing” offered by competitors and its “conservative and disciplined” approach to risk.

PNC said its farm-loan growth is being held back by customers who are wary of taking new debt, along with increased competition from the Farm Credit System.

Lenders are avoiding mounting risks in a category that is not core to their business, said Curt Hudnutt, head of rural banking for Rabobank North America, a major farm lender and subsidiary of Dutch financial giant Rabobank Group.

In March of this year, FDIC-insured banks reported that 1.53% of their farm loans were at least 90 days past due or had stopped accruing interest because the lender has doubts it will be repaid. This so-called noncurrent rate had doubled from 0.74% at the end of 2015.

The noncurrent rates were far higher on the farm loans of some big Wall Street banks. Bank of America Corp’s noncurrent rate for farm loans at its FDIC-insured units has surged to 4.1% from 0.6% at the end of 2015. Meanwhile, the bank has cut the value of its farm-loan portfolio by about a quarter over the same period, from $3.32 billion to $2.47 billion, according to the most recent FDIC data.

Bank of America declined to comment on the data or its lending decisions.

David Oppedahl, senior business economist for the Federal Reserve Bank of Chicago, said the banking community is increasingly aware of how many farmers are struggling.

“They don’t want to be the ones caught holding bad loans,” he said.