US oil heads to China, but it's too early to declare victory in the trade war - Recent News from USA
Skip to content
Economic news
recent-news06.02.2019

The first U.S. oil shipments to China in months will reach their destinations just days from now, punctuating a pledge by President Donald Trump in December that China would begin buying more American products despite an ongoing trade battle.

The shipments, which left ports in Texas in late December, are not a clear sign of U.S. victory, however. They are among a handful bound for China or points near it currently as a March negotiating deadline on a new trade deal draws near. And the amount of U.S. oil being shipped to China is well below what it was a year ago, when the trade war erupted.

The U.S. sent the equivalent of 500,000 barrels per day to China in 20 shipments during the months of February, March and April, according to data from Genscape, the world’s largest vessel monitoring company. There was only one shipment from the U.S. to China last fall before the two that left in December. Those final two held an average shipment equivalent to 100,000 barrels a day, about one-fifth the size of the spring peak.

“So while the oil deliveries are promising, the fact no subsequent ships are set to arrive after the tariff deadline shows you the pace of the trade discussions,” said Hillary Stevenson, director of oil markets and business development at Genscape. “We just have to wait and see. China is buying U.S. crude again but not at its old pace.”

Two ships, The Manifa and The Jag Lakshya, are estimated to arrive in China in the middle of February. Genscape can track their movement across the ocean using marine radar technology that shippers use to avoid running into each other on the open water. The journey from Texas to Asia takes about a month and a half, and ships often mark their destination as Singapore when they are really only refueling there before traveling another five days to China. 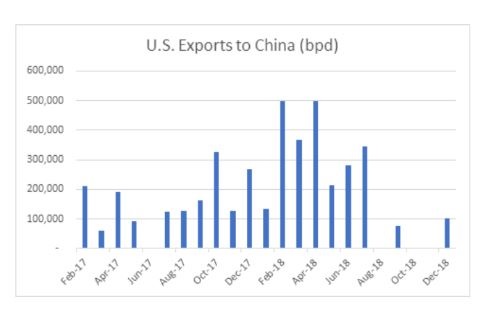 According to the data for Manifa’s voyage, the vessel was partially loaded with 2 million barrels of crude at the Seaway Texas City, Texas, dock and finished loading at the Galveston Offshore Lightering Area (GOLA) on Dec. 31, 2018. The vessel is expected to arrive in China around Feb. 17, though is still marked as headed for Singapore, according to Amir Bornaee, a market analyst at Genscape.

The other vessel, the Jag Lakshya, was loaded fully with 1 million barrels at Energy Transfer’s Nederland, Texas, dock on Dec. 16 with a final destination of Qingdao, China. It left Sinapore Feb. 3 headed to China, Genscape said. 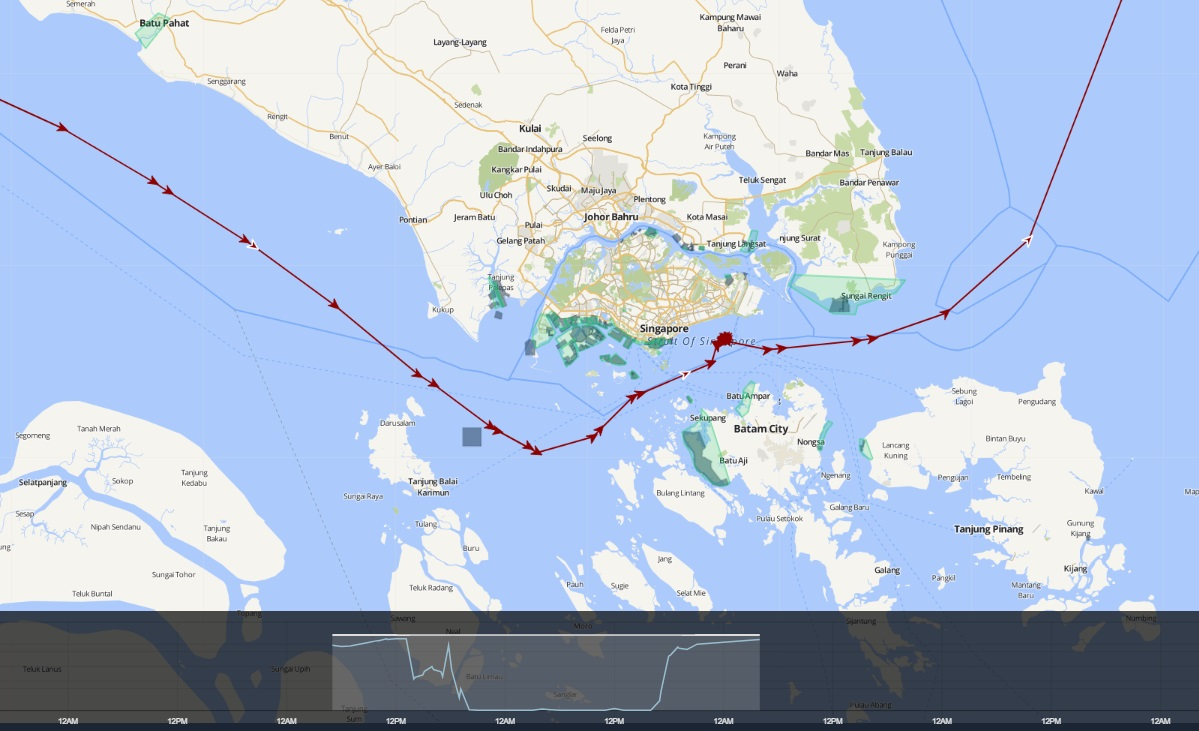 Stevenson tells CNBC that there are three additional vessels currently listing “Singapore” as their destinations, but that could later change to China. These ships are The Almi Atlas, the Farhah and the C. Freedom.

According to Stevenson, if the vessels did change their final destinations to China, the oil would arrive before the tariff talk deadline.

Stevenson said while the shipments of oil are a promising sign China is starting to purchase U.S. products again, she noted it is not an all-out trade war victory for the U.S. For one thing, there aren’t any ships currently leaving U.S. ports bound to China, where they would arrive after the March negotiating deadline.

Peter Mabson, CEO of the satellite maritime tracking service exactEarth, told CNBC that having vessels in route to a country with no trade agreement settled and a looming tariff deadline is too risky to plan ahead.

“The industry does not like uncertainty so it makes sense there are no additional vessels heading to China post tariff,” he said. “It costs money to divert vessels. It’s an expense the industry tries to avoid.”