US officials debate lifting tariffs on China to get a trade deal: WSJ - Recent News from USA
Skip to content
Economic news
recent-news18.01.2019

U.S. officials are reportedly debating lifting tariffs on Chinese imports to give Beijing a reason to make deeper concessions in ongoing trade talks between the two countries.

Treasury Secretary Steven Mnuchin proposed lifting all or some of the tariffs, The Wall Street Journal reported on Thursday, citing people close to the matter. The goal is to push forward trade talks and get China’s support for longer-term reform.

U.S. Trade Representative Robert Lighthizer, however, is resisting the idea, worried that it could be considered a sign of weakness, the sources said.

A senior administration official told CNBC’s Eamon Javers that “there’s no discussion of lifting tariffs now.” The official, who participated in a trade meeting at the White House on Wednesday, told CNBC that President Donald Trump “has no interest in making decisions now.”

China’s vice premier, Liu He, is scheduled to travel to Washington at the end of January for talks and that’s what the White House is focused on, the official told CNBC.

Stocks reacted swiftly to the report earlier Thursday, bouncing higher in midafternoon trading. The Dow Jones Industrial Average was up 245 points, or 1 percent, but then settled back. 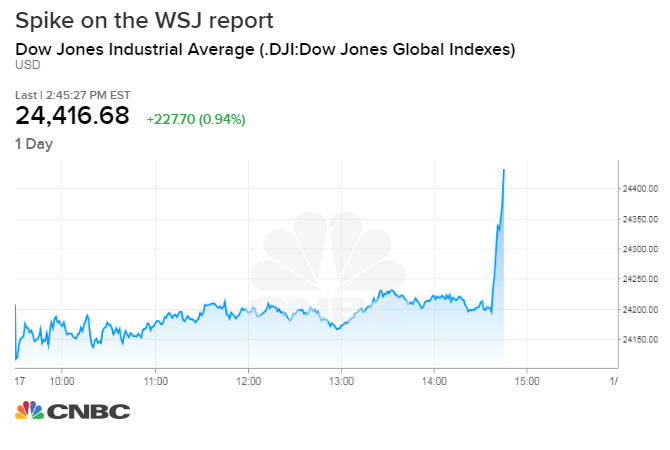 The U.S. and China have been meeting to hammer out trade issues after both sides launched tariffs on each other last year. The U.S. imposed duties on $250 billion of Chinese goods and threatened to add more. But Trump agreed to leave 10 percent tariffs on some $200 billion of goods in place this month rather than raise them to 25 percent as planned. China also slapped its own duties on U.S. imports but later in the year agreed to purchase U.S. agricultural and other products.

A Treasury spokesman working with the trade team told CNBC, talks are “nowhere near completion.”