Bond market says not only is a recession coming, but the Fed will cut interest rates to stop it - Recent News from USA
Skip to content
Economic news
recent-news26.03.2019

The bond market doubled down on scary warnings Monday, signaling both a possible recession is looming and that the Fed could have to cut interest rates this year to stop it.

“People are starting to get fearful,” said Andrew Brenner of National Alliance. “It won’t last for long, but they’re getting fearful about a recession. You had a Fed that changed course 180 degrees and then added to it last week. That caught the market off guard.”

The disconnect between stocks and bonds was fairly dramatic Monday, after the bond market flashed a recession warning Friday. The Dow traded as much as 100 points on both sides of unchanged Monday, but the bond market reflected a flight to safety trade, with yields falling across the curve from the shortest duration securities to the longest. The Dow ended up 16 at 25,516, while the S&P 500 fell 2 points, to 2,798.

The move was also global, with the German 10-year bund yield falling to a negative 0.03 percent.

At the same time, there was plenty of action in fed funds futures, where traders were betting on at least one 25 basis point cut from the Federal Reserve this year and more than two by next year. That’s a big change from late last year, when the market was still expecting interest rate hikes and the Fed was forecasting three.

On Friday, markets were spooked when the yield curve inverted, a reliable recession signal though usually not an immediate one. That means the rate on a lower duration instrument rose above a longer duration security’s yield. In this case, it was the yield on the 3-month bill, at 2.44 percent Monday, moving above the 10-year yield, which sank as low as 2.38 percent, a more than 2-year low. Yields move opposite price.

In another sign of angst, traders were also watching the 10-year yield Monday as it slid below 2.40 percent, about where the fed funds rate is. The 2-year, at 2.24 percent, was well below that level.

“The 10-year is inverted versus the current fed funds. It should signal expectations that rates are going to be lower in the future, which would be consistent with notable risk of a recession,” said Jon Hill, U.S. fixed income strategist at BMO. “One of the fascinating things is the stock market is taking this in stride. The Fed is trying to extend this cycle as long as it can. Whether it will be enough is difficult to say.” 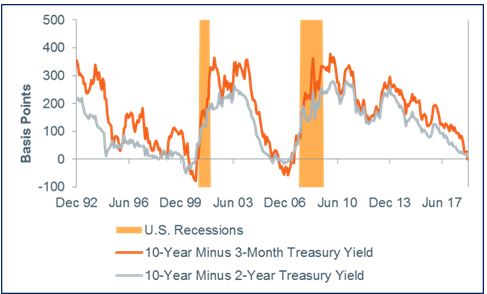 Hill said, however, he believes some of the moves in the market Monday were more about technical signals and short squeezes than real fear about recession. The Fed changed the tone in markets significantly Wednesday, when it was even more dovish than expected and cut its rate forecast to just one for this year from two.

Chicago Fed President Charles Evans also added to the move when he said on Monday that the Fed could hold or even loosen policy.

The Fed Wednesday released a new forecast for no rate hikes this year from two previously, but the market had been already been pricing in six basis points of an ease for this year. After the meeting, it moved to price in 19 additional basis points, or at least one 25 basis point cut this year, according to Hill.

“As far as recession goes, our economist feels quite optimistic that a recession will be avoided, at least this year. The market is focused not only on U.S. fundamentals but also on what’s happening in China, what’s happening in the rest of the world and how likely it is that political uncertainty, whether through trade policy or whatever, how likely is that to persist and beget a recession,” said Mark Cabana, head of short U.S.rate strategy at Bank of America Merrill Lynch.

Strategists said the curve inversion does not necessarily mean a recession is coming but it could. Stocks also historically have done fairly well immediately following such a move.

“As recession signals begin to flash and recession probabilities increase, I would expect market participants and people who deploy capital will become more cautious and there’s a risk that it’s a self-fulfilling prophecy,” Cabana said.

Brenner said the 10-year yield is getting ahead of itself but for now it cold still go lower. He said the market was bracing for about $350 billion in new U.S. debt this week in both notes and bills.

“We have the cheapest rates in a long time. You’re in the last week of a quarter plus it’s Japanese year end. All the things that are affecting it aren’t going to be affecting it next week,” said Brenner.