A recession indicator with a perfect track record over 70 years is close to being triggered - Recent News from USA
Skip to content
Economic news
recent-news20.02.2019

The unemployment rate, reported Feb. 1, rose to 4 percent in January from 3.9 percent. It is currently 30 basis points above the low of 3.7 percent reported in November. 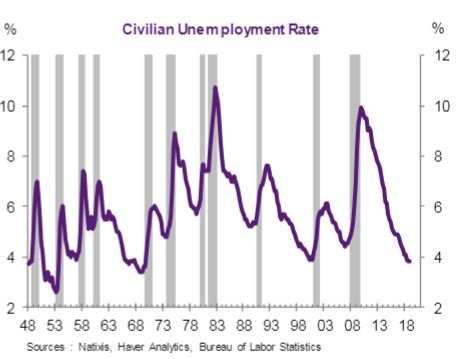 “The current rise is notable and would be troubling if it continues,” notes Lavorgna. Lavorgna, however, puts the risk of a recession at about one in three, and he expects the unemployment rate to head lower again, not higher.

“The recent increase in the rate has been due to rising labor force participation, which is a sign of economic strength not weakness,” he notes. The unemployment rate has risen for what economists say is a good reason — the long term unemployed are returning to the workforce and looking for jobs. .

“Generally job growth is positive just before a recession,” said LaVorgna. Job growth has averaged 240,000 over the past three months.

Lavorgna said there are mitigating factors that may make this cycle different. Lavorgna said the Fed’s policy about face is important because financial conditions have improved in the last six weeks, making recession less likely.

But he also says several of the economic series that could signal the end of a cycle may have peaked including ISM, jobless claims and the yield curve.

WATCH: LaVorgna says if Fed continues on its current path, we see a recession by 2020