A giant manufacturer just gave a glimpse into this earnings season as it tanks on tariff costs - Recent News from USA
Skip to content
Economic news
recent-news11.07.2019

For those who don’t see the trade war with China hurting U.S. business, a big industrial with a $17 billion market value just sounded the alarm on tariffs costs and related inflation.

The Minnesota-based Fastenal, the largest fastener distributor in North America, reported worse-than-expected second-quarter earnings and revenue on Thursday. The company also particularly noted the damage the trade war has done to its business and the difficulty of countering the losses.

“While we successfully raised prices as one element of our strategy to offset tariffs placed to date on products sourced from China, those increases were not sufficient to also counter general inflation in the marketplace,” Fastenal said in a press release.

“We have taken additional actions in the 3rd quarter of 2019 to counter the broader pressures we are experiencing on our costs as well as the additional tariffs that were levied on China sourced products in May 2019,” the company said.

Shares of Fastenal tanked more than 4% on Thursday. The stock was up more than 19% heading into Thursday’s poor report. The company said it earned 36 cents per share in the second quarter on $1.37 billion in revenue. Both results fell short of analysts’ estimates. 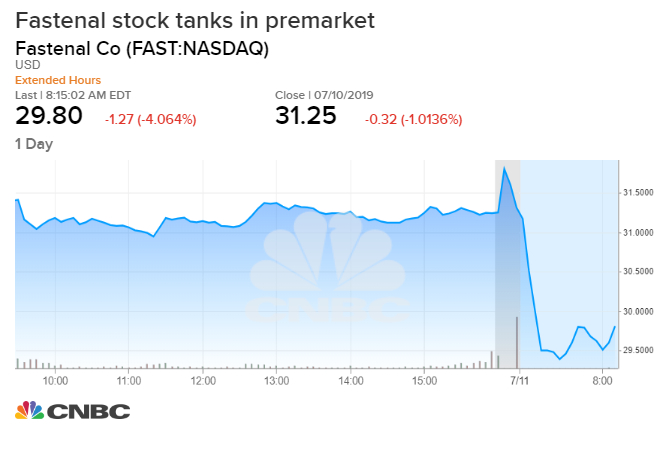 The U.S. hiked tariffs to 25% from 10% on $200 billion of Chinese goods in May, and China raised duties on $60 billion in U.S. goods in retaliation. While the two countries agreed to a truce at the G-20 Summit, a long-term trade deal doesn’t seem like a reality anytime soon.

The Chinese negotiation team has added some new faces, including Commerce Minister Zhong Shan, seen as a hard-liner by some White House officials, The Washington Post reported. This further dampens the hope for a concession from the China side as the two sides are set to restart trade talks.

President Donald Trump has on many occasions said the U.S. is collecting billions of dollars in tariffs from China, but many economists and organizations including the International Monetary Fund have pointed out that U.S. companies will be the ones that pay.

An IMF study found that tariff revenue collected from levies on Chinese goods “has been borne almost entirely” by U.S. importers.

Earnings season will give “market participants insight into exactly how the trade dispute with China is impacting operations as tariffs have been in place for more than a year,” said Lindsey Bell, investment strategist at CFRA. “Limited clarity on trade along with a slowdown in global growth contributed to earnings estimates for the second quarter moving lower.”